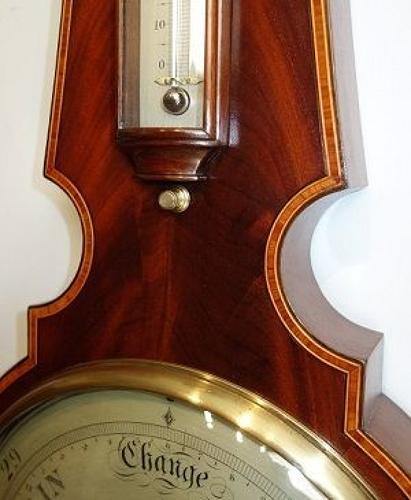 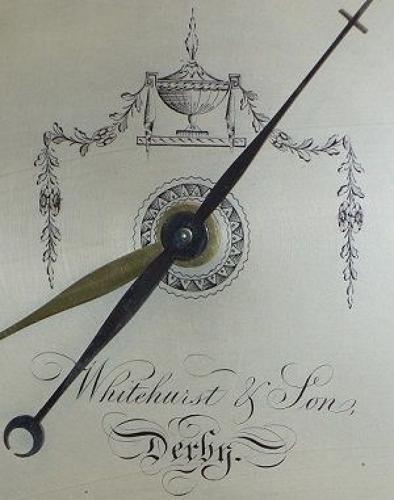 A superb 10" dial mahogany wheel barometer of the best quality, c.1830. The case is the highest quality workmanship of the period, the use of choice figured mahogany veneers outlined with tulip wood, ebony and boxwood banding, fitted with a detachable bow fronted thermometer, level, hygrometer and ebonised 'swan neck' pediment. The silvered 10" dial is exquisitely engraved with classical urn and swag decoration of the highest order and signed 'Whitehurst & Son, Derby', the dial sits behind a convex glass fitted within a cast brass bezel. The silvered level plate is again engraved with the fine urn and swags decoration.
(There were three generations of Whitehursts working in Derby making both fine clocks and barometers, with this example the work of John Whitehurst II, (born 1761 died 1834), who was the nephew of the renowned John Whitehurst senior, taking on the business at 22, Irongate, Derby when the latter moved to London. In circa 1810 he took on his son into a partnership and renamed the firm 'Whitehurst & Son' and which remained as such until the father's death in 1834 after which the firm reverted to just 'Whitehurst'. A number of barometers signed by differing members of the Whitehurst family are known in various museums including the British Museum and the Museum of the History of Science in Oxford).
H.45"