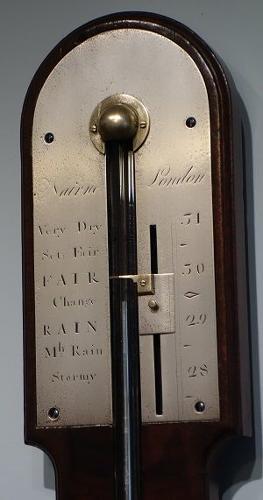 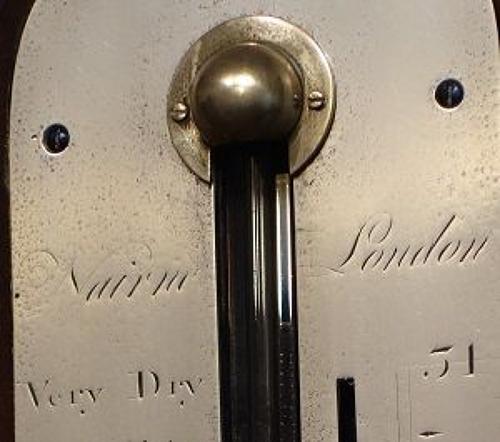 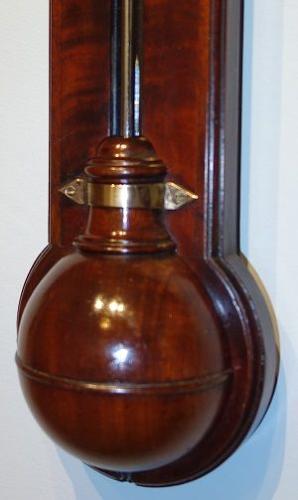 A good early George III mahogany stick barometer by the emminent maker Edward Nairne of London. The arch topped, edge moulded case with exposed tube is veneered in richly figured Cuban mahogany of good colour and fitted with a hemispherical turned cistern cover. The trunk of the case is slightly wider than that of later versions in a similar style, a feature of an earlier barometer.
The silvered brass scale plate is well engraved with a scale reading 27.5" - 31" and weather indications and signed 'Nairne, London'.

Edward Nairne, (1726-1806) was an important instrument maker during the second half of the 18th century. He was apprenticed to the optician Matthew Loft in 1741 and established his own business at 20 Cornhill in London after Loft's death in 1748. In 1774 he took his apprentice Thomas Blunt into partnership, a relationship that lasted until 1793 when Blunt opened his own shop at 22 Cornhill. Nairne devoloped the constricted marine tube in 1773, invented the rubber eraser and was elected a 'Fellow of the Royal Society in 1776. See 'English Barometers 1680-1860' by Nicholas Goodison p.186-189.