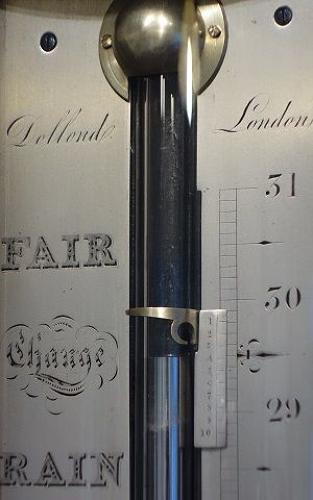 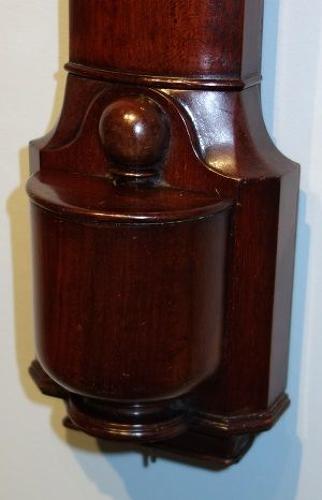 A good bow-fronted London stick barometer by the famous maker Dollond of London, c.1840.
The bow-fronted case with 'ogee' moulded pediment, is unusually constructed in solid mahogany timber rather than the typical method of adding mahogany veneers onto a pine carcase.
The silvered register plates are again very well engraved with a 27"-31" scale and the makers name, 'Dollond, London'. The plates are fitted with a rack and pinion operated vernier. The case terminates with an turned urn shaped cistern cover which conceals the boxwood cistern and wide bore tube. The wide bore tube provides a greater width to the top of mercury column and hence a flatter meniscus, allowing a more accurate reading to be taken.

The renowned Dollond family of instrument makers was founded by Peter Dollond circa 1750 and continued until the early 1900's when it was bought by Aitchison, hence Dollond and Aitchison .
This barometer was made during the period of George Dollond, (1774-1856) who continued the business after the death of his uncle, Peter, in 1820. He was instrument maker to Willian IV and Queen Victoria.